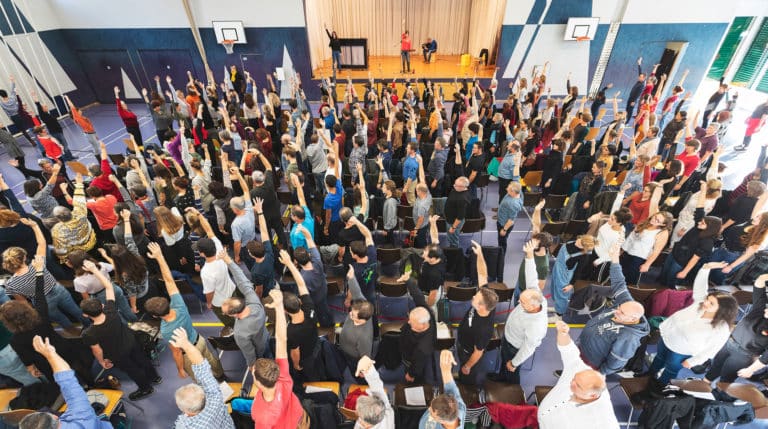 Choirs and musicians in the arena

The score will be performed on stage by some 240 musicians and the choirs bring together 655 adults, 85 young people and 153 children,  nearly 900 singers!

Choirs and musicians in the arena

The score will be performed on stage by some 240 musicians and the choirs bring together 655 adults, 85 young people and 153 children,  nearly 900 singers!

Le choeur de la Fête: the festival choir was formed in a collaboration amongst 16 choral groups across the region. They joined the project already two years ago. Some were regrouped and together welcome the 470 choir members involved. There are 11 groups in total, which each rehearse under the direction of their respective choirmasters.

Les choristes-percussionnistes: the chorus-percussionists form a contingent of 185 people organised in four groups of adults and 85 young people in three groups. The seven ad hoc choir groups are supported by professional choirmasters. They sing and play on the yellow boxes, hence their name as chorus-percussionists. Their costumes represent the ants.

Les voix d’enfants: the children’s voices are made up of two school choirs (Blonay and La Tour-de-Peilz) and three ad hoc groups. They rehearse under the direction of four choirmasters.

The different ensembles of live instrumental music are as follows

The big band is made up of 16 professional or semi-professional musicians, including their director Jérôme Thomas. This jazz group will play in the show but also in the Ville en Fête.

Les percussionnistes: thirty-eight musicians, experienced amateurs and advanced students of the conservatory make up the percussionists. Their two choirmasters Claude Meynent and Stéphane Borel are professional percussion teachers. These musicians play various instruments and rehearse once a week in the basement of the Forestay Hall in Chexbres. They wear the locust costumes.

L’harmonie is made up of 107 musicians with two professional choirmasters who will conduct the ensemble in alternation, Pascal Braillard and Stéphane Pecorini. This ensemble brings together musicians from La Lyre de Vevey, the Montreux-Clarens Music Corps and musicians from all over the region to form this important group required for the festival’s musical performance.

The Alphorn group is made up of 36 amateur musicians recruited by audition. Their conductor Pascal Favre is a professional musician.

The Fifres et Tambours group comes from Basel. There are 25 of them, rehearsing at home in preparation for the festival. They will be partly present in Vevey during the Proclamation of May 4. 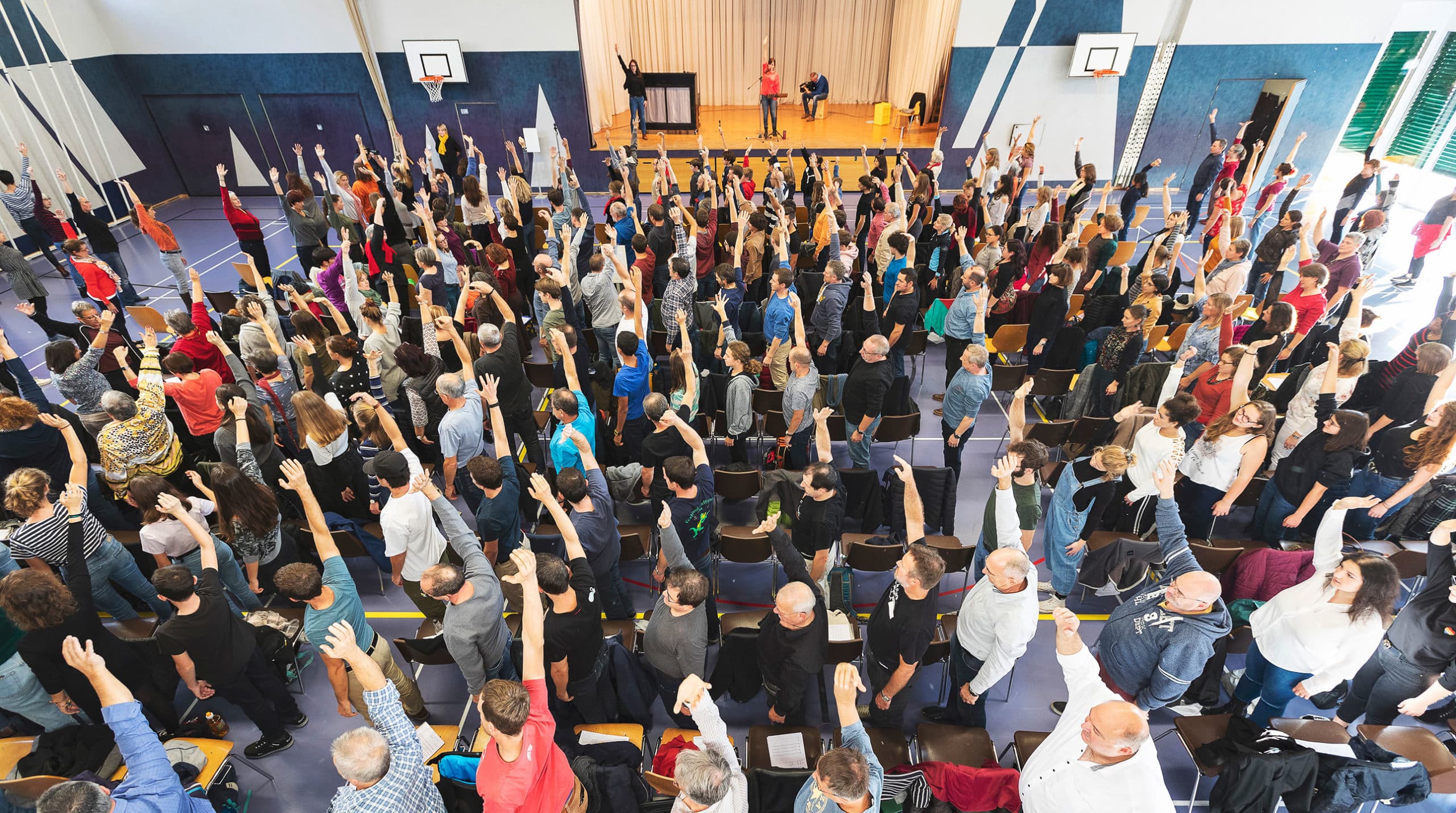 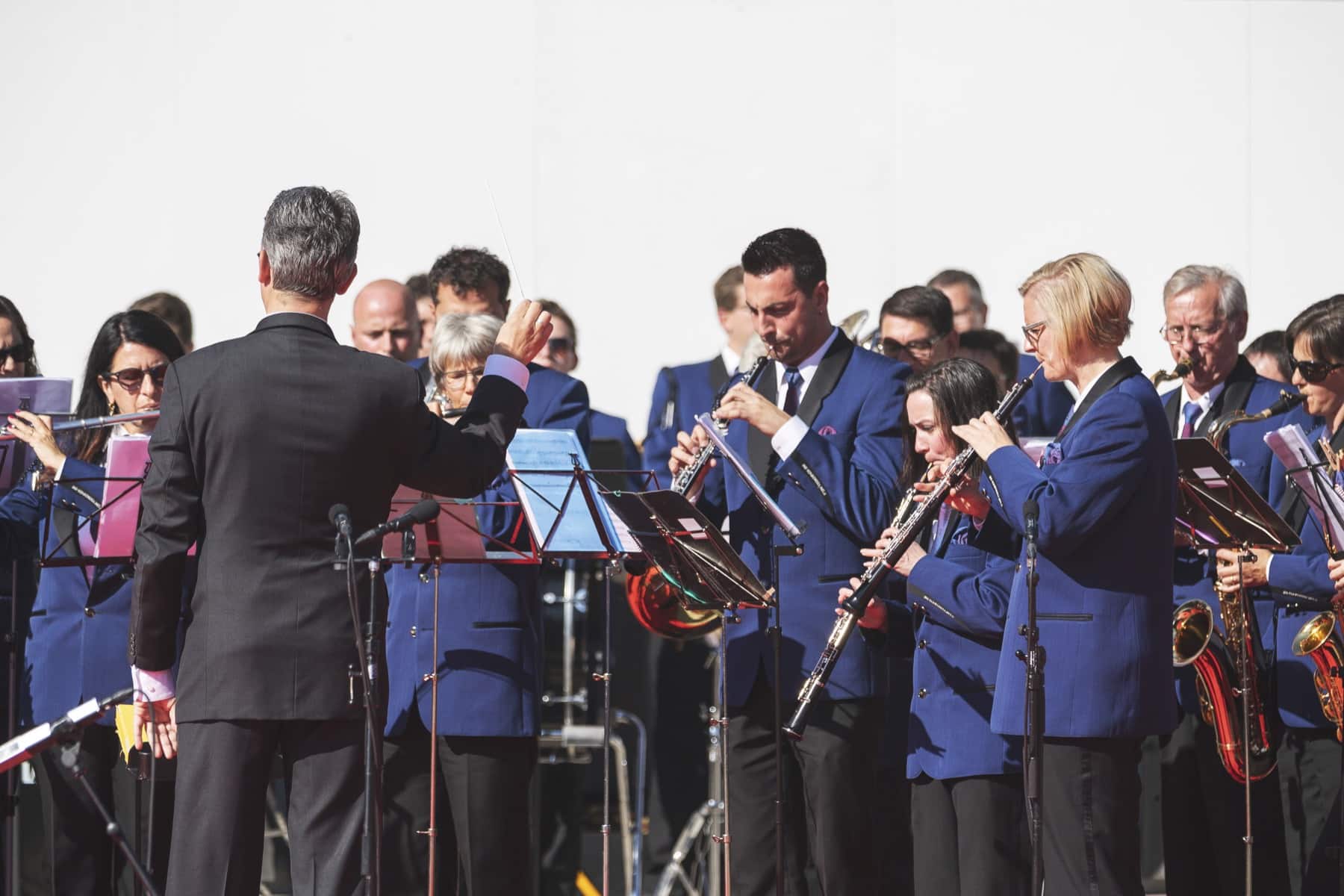 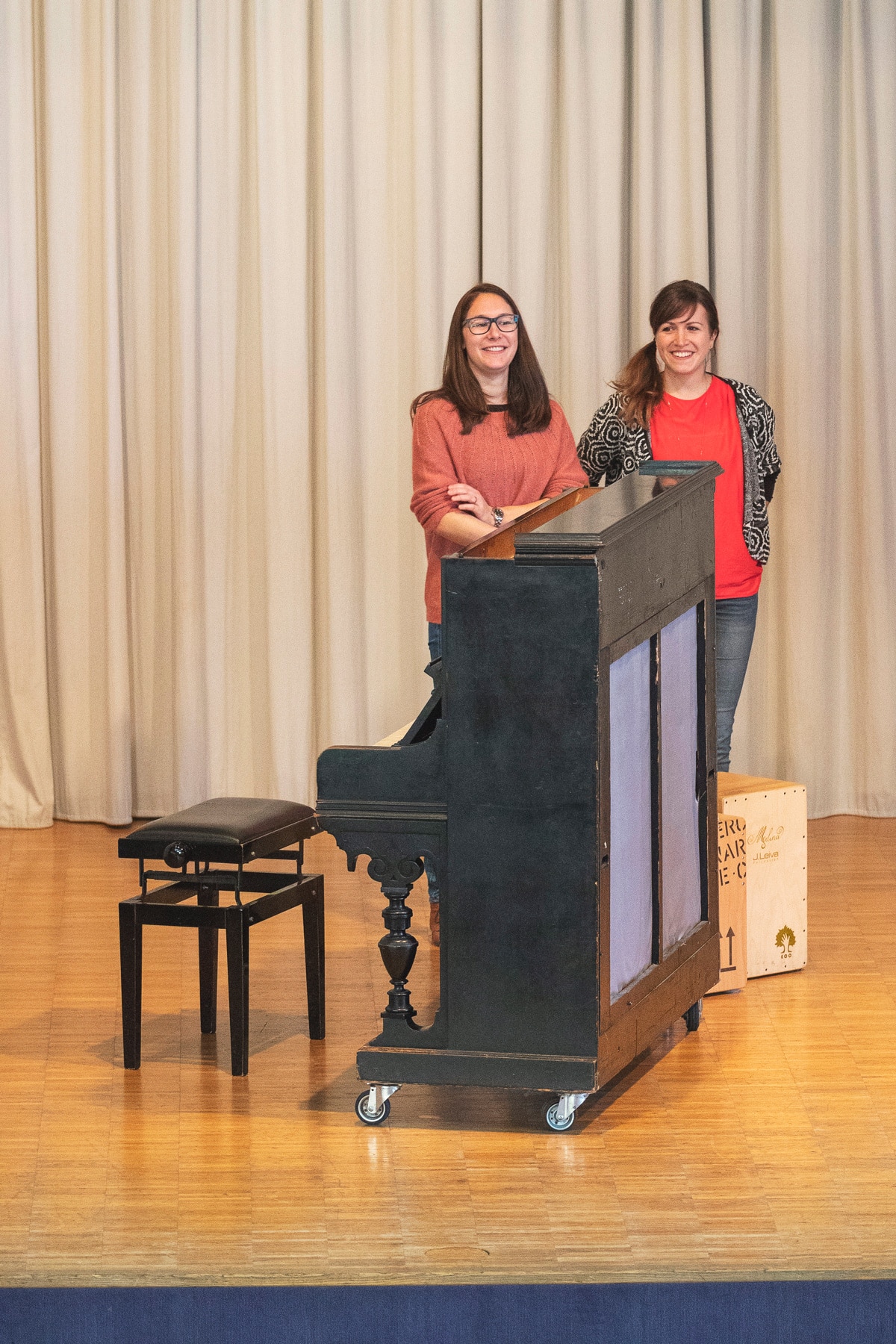 Some 26 choirmasters have been called upon to prepare the choirs and conduct rehearsals. Some prepare singers but do not participate in the festival itself. Some will conduct a specific piece of music or a certain subgroup. Others will be present as reinforcements to prepare the singers and relay or stand at the ready as replacements. These are the following choirmasters: Cyril Ansermet, Luc Baghdassarian, Stéphane Borel, Renaud Bouvier, Pascal Braillard, Yves Bugnon, Roland Demiéville, Jean-Luc Dutoit, Pascal Favre, Céline Grandjean, Timothée Haller, Johanna Hernandez, Laurent Jüni, Claude-André Mani, Pascal Mayer, Caroline Meyer, Claude Meynent, Claude Nicolet, David Noir, Elsa Bianchi, Alexandre Pasche, Stéphane Pecorini, Jérôme Thomas. Two choirmasters, Caroline Meyer and Céline Grandjean, conduct the Tutti à Roche. Several professional pianists are also required to accompany the rehearsals of the children’s and youth choirs and for some rehearsals of the adults and tutti.

Six musicians will play the role of quasi-solo instrumentalists. They are six professional musicians from French-speaking Switzerland, namely the Veveysanne Jeanne Gollut on pan flute, accordionist and bandoneonist Stéphane Chapuis, Canado-Swiss Stéphanie Joseph on violin, Jean Samuel Racine from Lausanne on clarinet and Anne Gillot on bass clarinet, and finally Jocelyne Rudasigwa from Chaux-de-Fonnière on double bass. The last four perform regularly together in the Boulouris 5 quintet.

Jeanne Gollut, a child of Mont-Pèlerin, divides her time between her concert career and teaching her instrument at the Montreux-Vevey-Riviera Conservatory of Music.

Stéphane Chapuis, born near Porrentruy, is a virtuoso of the bandoneon and the accordion. He alternates between concerts, dramatic performances and teaching at the HEMU Lausanne, the Conservatoire cantonal de musique de Sion and the EJMA-VS.

All six master a repertoire without borders, ranging from classical to contemporary and the various genres of today’s music, as well as traditional and folk music, jazz, tango, French chanson or improvisation. 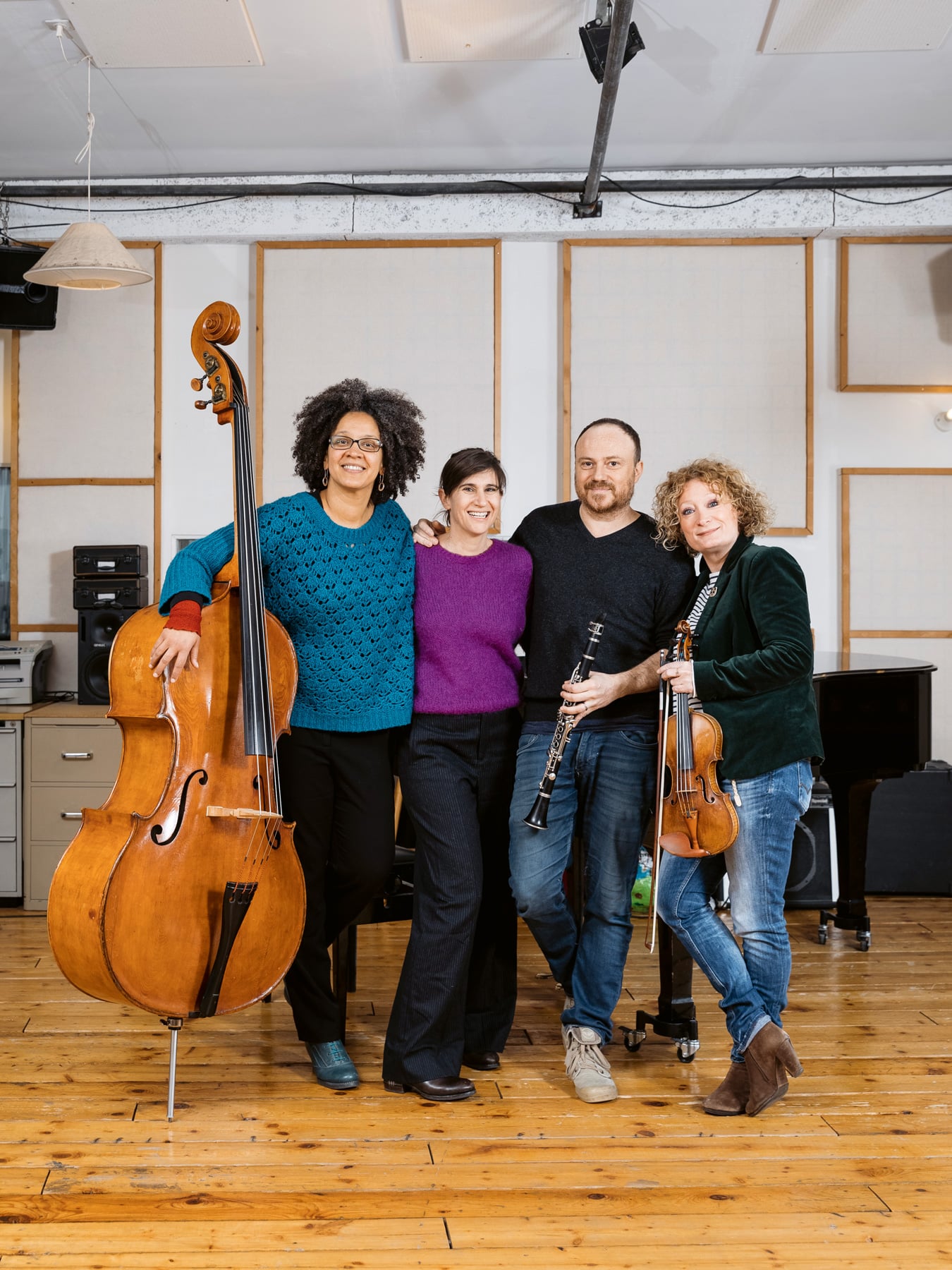 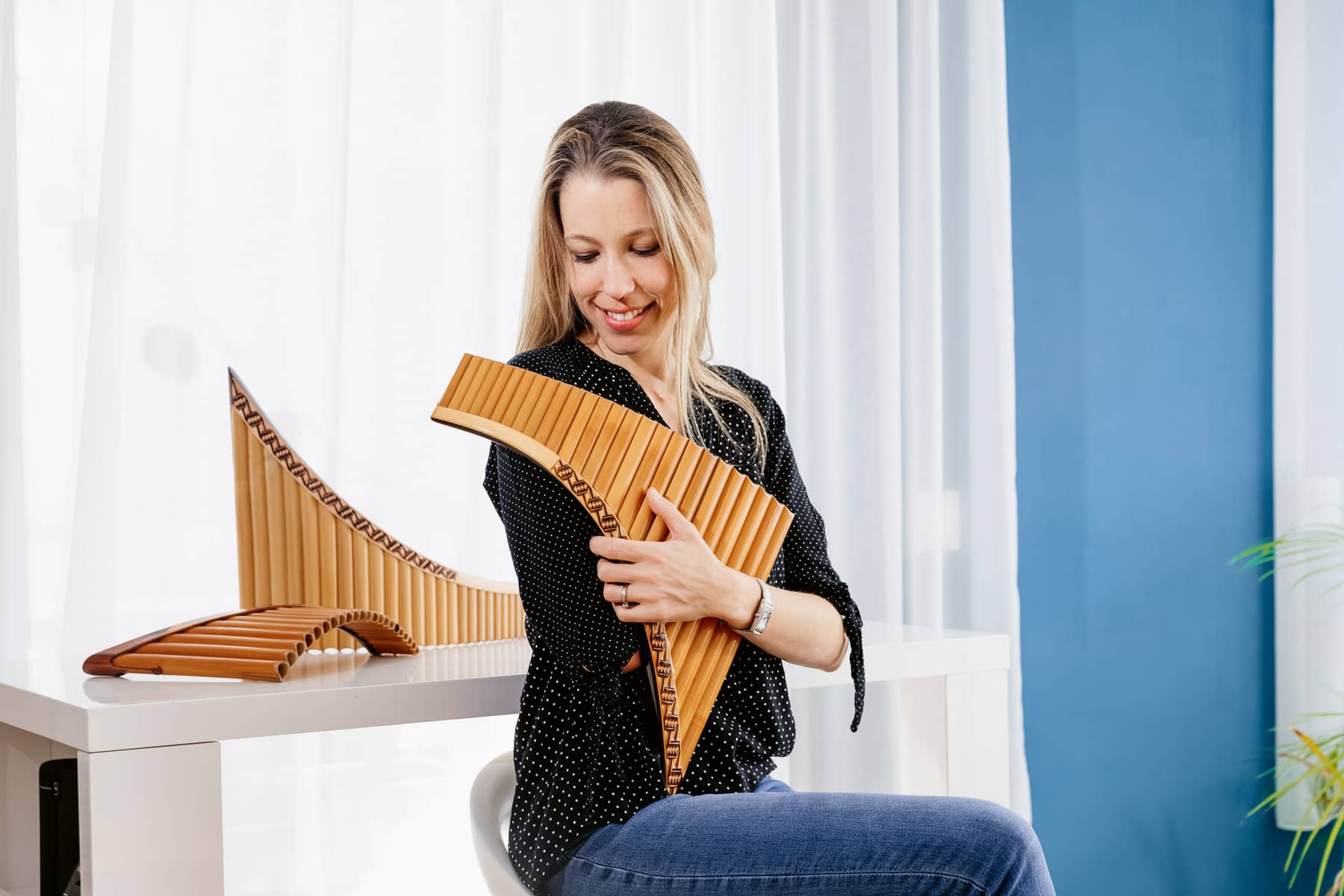 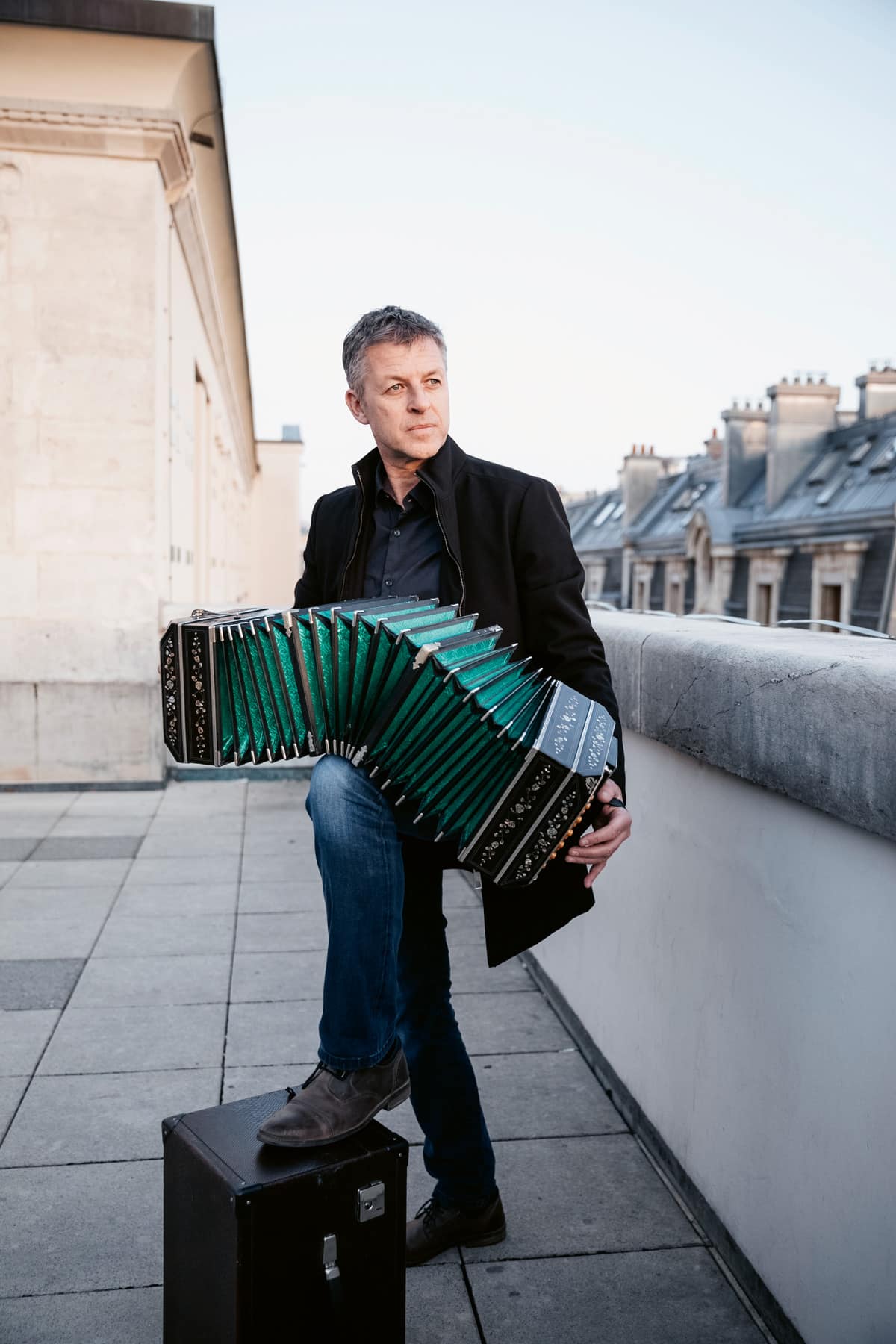